I wrote on Seeking Alpha about the short thesis on Western Union(WU).   The company is paying $586 million settlement in which it admitted to aiding and abetting wire fraud. However  competitive decline is an even larger long term threat.  Not mentioned in the article, I was actually long the stock from 2012-2015, having bought because I thought the market overreacted to its decision to cut prices on remittances. I ultimately sold because I was disappointed with the company’s response to the technological disruption in the global remittance market.   I didn’t go short till late 2016. Its a relatively small position(about 2%), but I generally avoid shorting in size.  As this chart shows, the incumbents are losing pricing power in the remittance market: 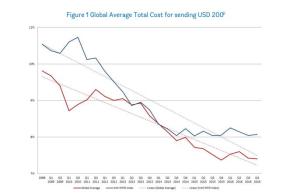